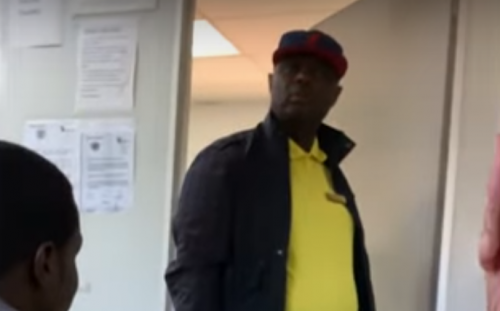 You white people, you make me sick - Racism in South Africa
Timeline

Board president defended the decision from critics, saying that for “people of color,” being “surrounded by other people similar to them, makes it easier.”

Board president defended the decision from critics, saying that for “people of color,” being “surrounded by other people similar to them, makes it easier.”

You white people, you make me sick - Racism in South Africa

A licensing department official has come under fire for his alleged racist rant against a client in Bedfordview, west of Ekurhuleni, South Africa.

The city of Ekurhuleni said in a statement on Tuesday that it was aware of the video, saying the matter is taken seriously and an investigation has been instituted.

Motivational speaker Gavin Sharples, who intervened after witnessing the incident, told TimesLIVE on Tuesday that he went to the licensing   department on May 20 to renew his driver's licence.

Sharples said he witnessed an official "berating, insulting and humiliating" a young man who was there for his learner's or driver's licence.

He said the official started shouting at the young man, telling him he was doing him "a favour" by speaking in English.

The official also told the young man that he did not understand English and that he should speak in his mother tongue.

Sharples said the man was heard saying "you white people need to learn your own language".