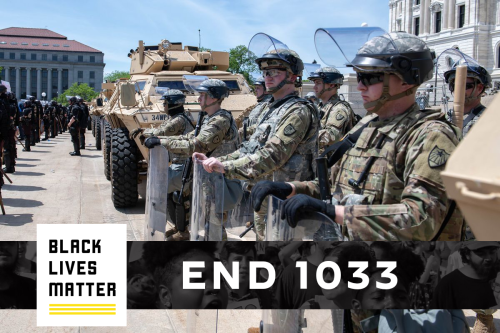 Biden’s first 100 days are up in 10 days. By then we need him to #End1033, which transfers military equipment into the hands of police across the country-- including school & campus police. Another example? The military you see out on your streets ahead of the Chauvin verdict.

Biden is currently sending more military equipment to our neighborhoods than Trump did. You read that right. Our communities are being terrorized at a greater rate than they had been under Trump. April 30th marks President Biden’s 100th day as president — and we’ve got a major demand for him before that deadline: Demilitarize our neighborhoods and end 1033.

Here’s what you need to know: The Law Enforcement Support Office, known as the 1033 Program, allows the transfer of surplus military-grade equipment to local law enforcement agencies across the country. It includes school and campus police, too.

Even as we attempt to grapple with the Derek Chauvin trial, anxiously awaiting a verdict — killings by police have continued. Our screens continue to be filled with state-sanctioned violence against Black people. And when we peacefully protest in the name of Black lives, we’re met with violence from police. But when white supremacists stormed the Capitol in January, they were invited in and posed for pictures with police.

No responsible leader should be increasing the weapons police have access to — and if President Biden cares about the countless Black folks who showed up to put him in office, he would recognize that. If we want President Biden to take swift action before his 100th day in office (just 10 days from now), then we need a lot of voices speaking out right away.

We are calling on the Biden administration to end the 1033 program altogether. Send a message to the White House and let them know — #End1033 — by the time President Biden reaches his 100th day in office.