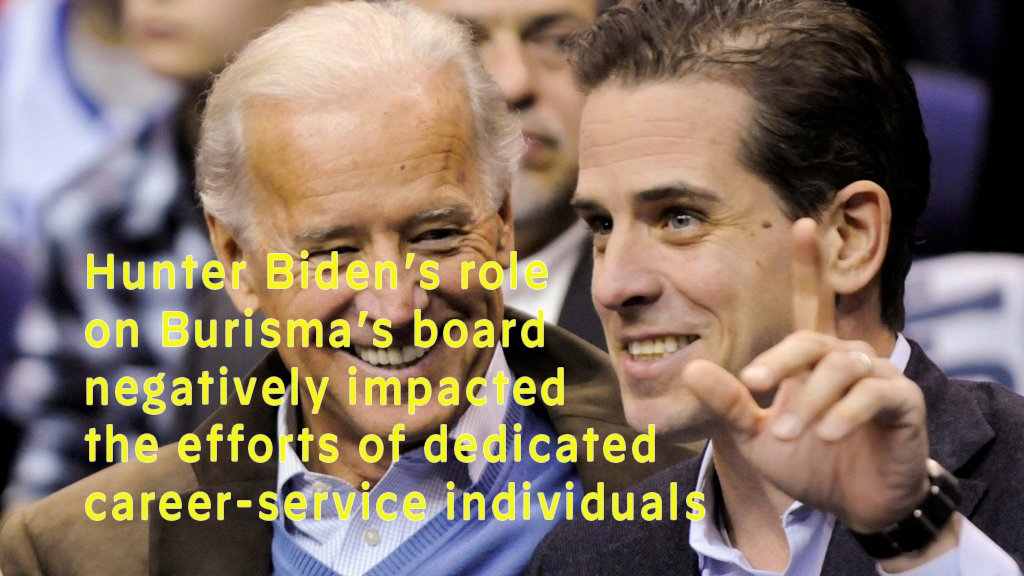 In late 2013 and into 2014, mass protests erupted in Kyiv, Ukraine, demanding integration into western economies and an end to systemic corruption that had plagued the country. At least 82 people were killed during the protests, which culminated on Feb. 21 when Ukrainian President Viktor Yanukovych abdicated by fleeing the country. Less than two months later, over the span of only 28 days, significant events involving the Bidens unfolded.

On April 16, 2014, Vice President Biden met with his son’s business partner, Devon Archer, at the White House. Five days later, Vice President Biden visited Ukraine, and he soon after was described in the press as the “public face of the administration’s handling of Ukraine.” The day after his visit, on April 22, Archer joined the board of Burisma. Six days later, on April 28, British officials seized $23 million from the London bank accounts of Burisma’s owner, Mykola Zlochevsky. Fourteen days later, on May 12, Hunter Biden joined the board of Burisma, and over the course of the next several years, Hunter Biden and Devon Archer were paid millions of dollars from a corrupt Ukrainian oligarch for their participation on the board.

As the Chairmen’s report details, Hunter Biden’s role on Burisma’s board negatively impacted the efforts of dedicated career-service individuals who were fighting to push for anticorruption measures in Ukraine. Because the vice president’s son had a direct link to a corrupt company and its owner, State Department officials were required to maintain situational awareness of Hunter Biden’s association with Burisma. Unfortunately, U.S. officials had no other choice but to endure the “awkward[ness]” of continuing to push an anticorruption agenda in Ukraine while the vice president’s son sat on the board of a Ukrainian company with a corrupt owner. As George Kent testified, he “would have advised any American not to get on the board of Zlochevsky’s company.” 429 Yet, even though Hunter Biden’s position on Burisma’s board cast a shadow over the work of those advancing anticorruption reforms in Ukraine, the Committees are only aware of two individuals who raised concerns to their superiors. Despite the efforts of these individuals, their concerns appear to have fallen on deaf ears