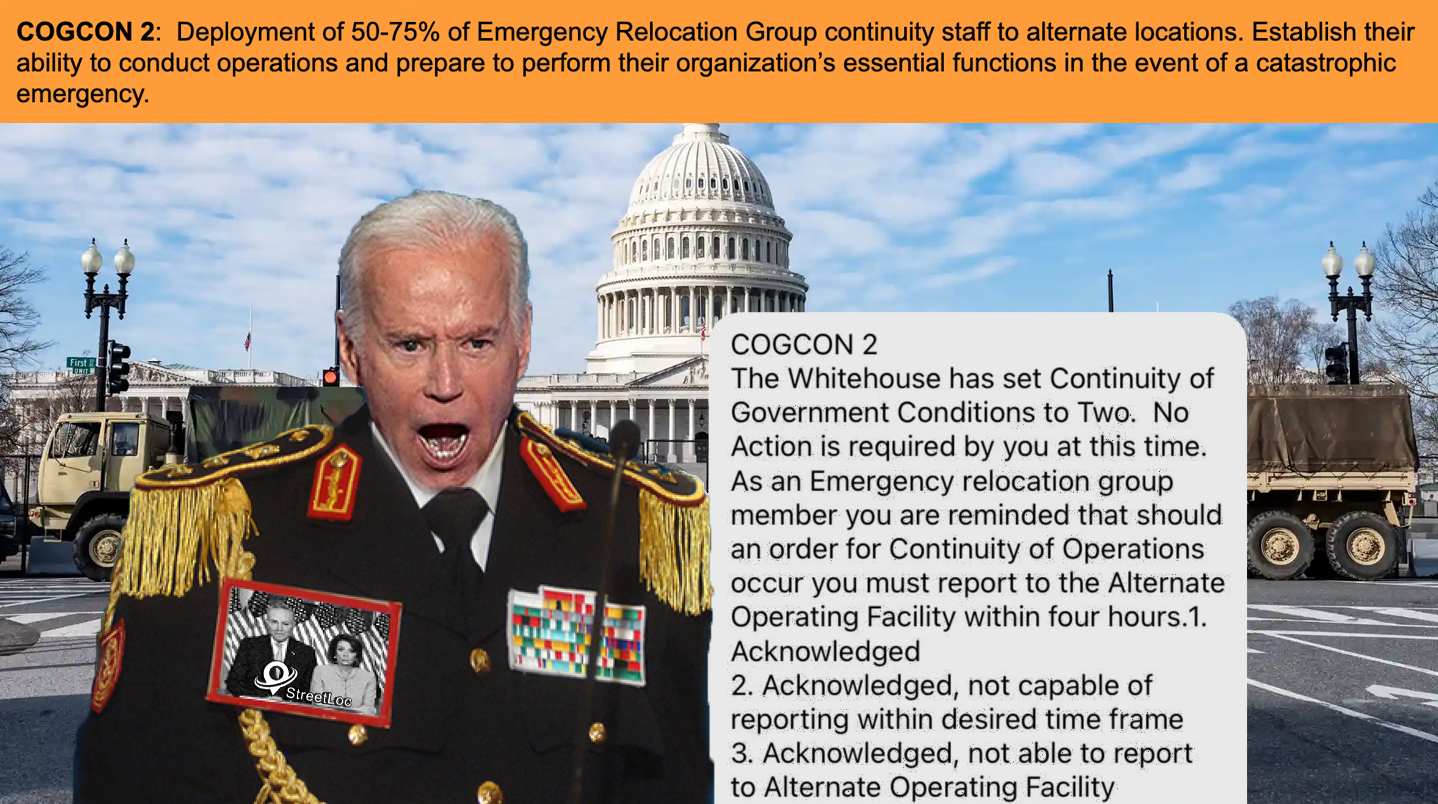 US Moves to COGCON 2: Deployment of 50-75% of Emergency Relocation Group continuity staff to alternate locations.

COGCON 2 - TEXT MESSAGEThe Whitehouse has set Continuity of Government Conditions to Two. No Action is required by you at this time. As an Emergency relocation group member you are reminded that should an order for Continuity of Operations occur you must report to the Alternate Operating Facility within four hours.

COGCON is a United States government readiness level, roughly analogous to the DEFCON alert state system, tracking the readiness of the government in the event of an emergency. The system was introduced in National Security Presidential Directive 51, signed by George W. Bush on May 4, 2007.

The President alone determines and issues the COGCON Level.

Since the days of the Cold War, the United States has had a plan in place to continue the operation of the government following a catastrophic attack on the nation's capital. The 2007 "National Security Presidential Directive 51" directs the geographic dispersion of leadership, staff, and infrastructure in order to maintain the functions of the United States Government in the event the nation’s capital is “decapitated” by a terrorist attack.Buried deep within the 102-page National Continuity Plan is the strategy for the mass evacuation and relocation of every federal government agency including The White House and the military in response to an exceptional catastrophic event within the National Capital Region. Each agency is required to have a detailed Continuity of Operations Plan (COOP) in place.

Following a catastrophic national emergency, the President, or his successor can authorize the establishment of a temporary "shadow government" to maintain control of the essential functions of the Federal Government. President Bush activated the shadow government on September 11, 2001 shortly after the second attack on the World Trade Center.

Every federal agency has designated key individuals to be part of an "Emergency Relocation Group". These ERGs are assigned to an alternate secure location on a rotating basis and are ready to take over the duty of supporting the National Essential Functions of this nation in an emergency. The President would evacuate via the White House Tunnel System to the Marine One hangar at the Anacostia Naval Support Facility. His ultimate destination would be onboard the E-4B National Airborne Operations Center (NAOB), a highly survivable militarized version of the Boeing 747-200 capable of being refueled in flight.

After several days in the air, the President could choose to go to one of the Presidential Emergency Facilities at Mount Weather, Site R, the underground bunker at Camp David, the bunker at Offutt Air Force Base, the new bunker under the Denver International Airport, or other still-classified locations.

Evacuating the Presidential Line of Succession

The U.S. Northern Command (NORTHCOM) is responsible for evacuating government officials under the guidance of the classified Concept of Operations Plan CONPLAN 3600: Emergency Preparedness in the National Capital Region. The executive agency and department heads along with designated emergency relocation group (ERG) members would be transported to classified locations around the country above ground, below ground, and at sea.

The secret evacuation plan includes a nearby fleet of specialized vans and trucks that can be dispatched on a moment's notice to secret campgrounds located within the Shenandoah Valley and in nearby federal park lands in Virginia, Maryland, Pennsylvania, and West Virginia containing underground hardened facilities with emergency communication systems.

An Emergency Action Alert sent by the FEMA Alternate National Warning Center in Olney would direct the 1st Helicopter Squadron from Andrews Air Force Base to the Capitol to evacuate the top congressional leaders to the Mount Weather Emergency Operations Center. The Secret Service would take the Vice President and top-ranking White House officials down into the underground bunker in the White House.

Three Air Force C-20C aircraft (85-0049, 85-0050, and 86-0403) based at Andrews AFB are operated by the Presidential Airlift Group (PAG) of the 89th Airlift Wing. The C-20C aircraft are a secret part of the COG program and are designed to move senior executives (Senex) quickly in the event of a national emergency.

The three C-20C aircraft are equipped with a comprehensive hardened communication system installed by E-Systems and designed to enable operations in a post-nuclear environment. Whenever the President travels away from Washington, a C-20C is positioned discretely at an adjacent airfield in case the President has to suddenly depart and Air Force One has been disabled.