StreetLoc
Cultures & Nations Remarks by 45th President Donald J. Trump at the Let Us Worship "Day of Prayer for America" 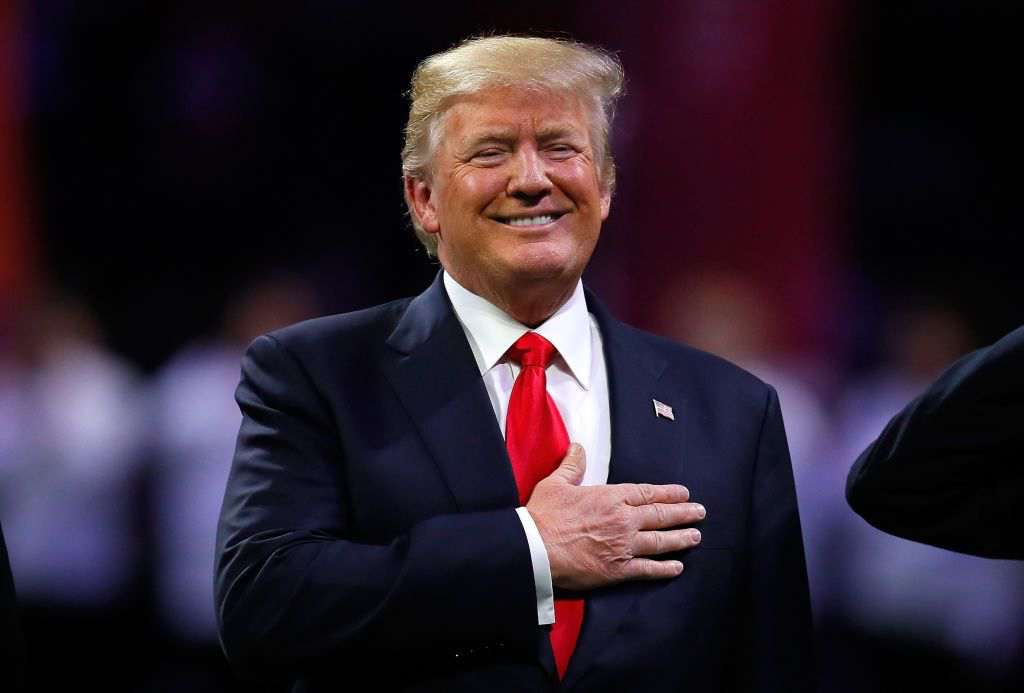 Remarks by 45th President Donald J. Trump at the Let Us Worship "Day of Prayer for America"

It is an absolutely profound honor to address all of you gathered on the National Mall on this very solemn day of remembrance and prayer, as our Nation commemorates the 20th anniversary of the terrorist attacks of September 11, 2001, a terrible day.

I want to thank Sean Feucht and everyone from the amazing Let Us Worship movement for hosting this very beautiful and incredible event. Since last year, you have brought worship and prayer to 132 cities all across the Country—including the largest church service in America right here in our Nation's capital. By uniting citizens of all denominations and backgrounds to promote faith and freedom in America, you are strengthening our entire Nation and we thank you for it.

There could be no more fitting night for Americans to join hands and bow our heads in prayer than this evening.

Two decades after nearly 3,000 Americans were murdered at the World Trade Center, the Pentagon, and a field in Western Pennsylvania, we honor the memory of every innocent soul killed in the September 11 attacks. We cherish their legacy, and we reaffirm our everlasting vow to Never Forget.

We all remember hearing in the hours and days after the attacks the stories of Police Officers, Firefighters, and First Responders who showed bravery and daring far beyond the call of duty. As a lifelong New Yorker, it was extraordinary to witness the strength and resilience of people of that incredible city, and it is indeed an incredible city. They raced into danger, toward the smoke, without a thought of their own safety. The heroism of the NYPD, the FDNY, the Port Authority Police, as well as the First Responders at the Pentagon, and so many others will live in our national memory for all time.

Tonight, I want to express our thanks to every First Responder present on the National Mall. You are the very best of our Nation. You are incredible people.

I also want to ask every American here today, and all across the Country, to take a moment to share our gratitude for the countless people—active duty Service Members, Veterans, and Military families—who have sacrificed to defend our Country over the past two decades. And let’s especially be thanking and thinking of the brave heroes who served in Afghanistan. They courageously volunteered to hunt down the vile killers who attacked America, and to eliminate the menace of Radical Islamic Terrorism from the face of the earth. And I know what you are thinking because we have suffered a great, great embarrassment over the last week. A terrible thing has happened, terrible decisions were made by this administration. But you are brave, you are incredible, and it will be made up.

Earlier today, members of the Let Us Worship Movement placed flags on the graves of every Service Member in Arlington Cemetery who gave their life for our Nation since September 11. To the Gold Star families present on the Mall, and to the families of all the Service Members who have made the supreme sacrifice in our fight against the terrorist enemy, please know that you have our undying loyalty, our eternal devotion, and the love and support of every single American.

As we pray and reflect on this anniversary, one story from that terrible day points the way forward for our Nation and reminds us of the infinite source of our hope.

As black smoke was billowing from across the Potomac at the Pentagon and the skies of New York were full of ash and flame, a lone figure stood at a window near the base of the North Tower of the World Trade Center. Father Mychal Judge was the chaplain of a New York City fire station. When the first plane struck the World Trade Center, he raced inside knowing the danger. Video testimony shows him standing still at the large window, looking up at people falling to their deaths. A friend and fellow priest later recounted that if you watch carefully, you can see the Father's lips moving.

"For those of us who know him," the friend said, "he wasn't one that talked to himself. He was praying.”

The day before he died, Father Mike spoke at the dedication of a New York City fire station. Before a group of firefighters, he shared a message that echoes across all time.

“You do what God called you to do,” he told them. “You show up. You put one foot in front of the other. You get on the rig and go out and you do the job, which is a mystery. You have no idea what God has calling for you.” You have no idea where you’re going, and in some cases you don’t know why. “But he needs you. He needs me. He needs all of us.”

Tonight, Father Mike's words remind us that in the end, there is only one true answer to the depth and the evil that we saw on September 11, 2001. It is God.  That is the answer that stood tall over the wreckage at Ground Zero, where rescuers forged the mighty steel cross from the fallen towers' broken beams. It is the same sight that was seen hundreds of miles away in Shanksville—where the first, spontaneous memorial to the heroes of Flight 93 was a simple, but beautiful, wooden cross. And it is this same turning to God—the ultimate answer to evil—that we see here today, as thousands of Americans gather on the mall to pray for our beloved Nation and to pray for one another.

I want to thank Let Us Worship for calling Americans to 21 days of prayer in the coming weeks. America is a Nation strengthened and sustained by God and the prayers of all His children.

Your faith is a force that our enemies can never ever extinguish. Your love of God, Family, and Country is more powerful than any adversary's hatred, or malice, or scorn.

So as we remember those Americans we lost two decades ago, we return again and again to the same simple prayer that was heard echoing all across our land in the days after the September 11 attacks: God Bless Our First Responders. God Bless Our Service Members. God Bless the memory of all who died on 9/11. And God Bless America. Thank You.

0 2 0 0 0 0 0
StreetLoc is a Facebook styled Social Media Platform, we are not an Adult-Day-Care, managed by woke kids. StreetLoc is designed for Family, Friends, Events, Groups, Businesses and People.JOIN NOW
Comments (0)