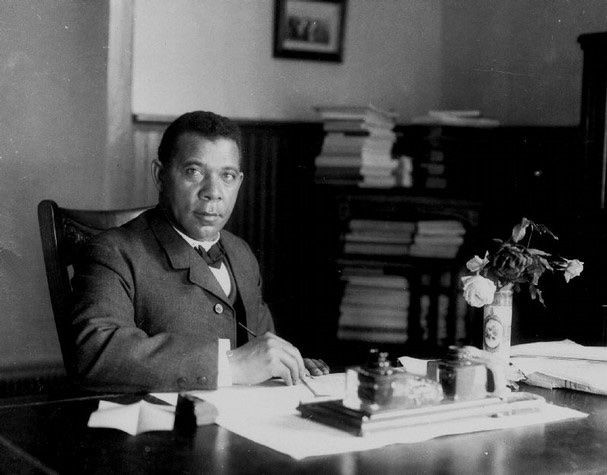 There's one prominent American who isn't included in this pantheon of historical greats.  In fact, he's one of the most underappreciated historical figures in American history.

Born into slavery, he was determined not to allow his past, nor his race, to determine his future.  He pursued education and emphasized character development and self-determination.  He also stressed the obligation and the virtue of­ work.

His ability to transcend enormous hardships saw him help build a school literally from the ground up.  Though he repeatedly refused the temptation to become a politician, his record of personal and professional excellence enabled him to advise presidents Roosevelt and Taft.  Despite his extremely modest beginnings, he became an influential black intellectual and one of the foremost educators of his time.

As a result of his influence on Negro education and economic development — in addition to his desire for racial conciliation in the South — he was once called the "foremost man of his race in America."

Who is this great man?

See more...
Comments
Join StreetLoc - Personal Account
Log in
By signing up, you agree to the Terms of Service and Privacy Policy.
Sponsored
Search
Delete?
This can’t be undone and it will be removed from your profile, the timeline of any accounts that follow you, and from StreetLoc search results.
Please, enter a value here