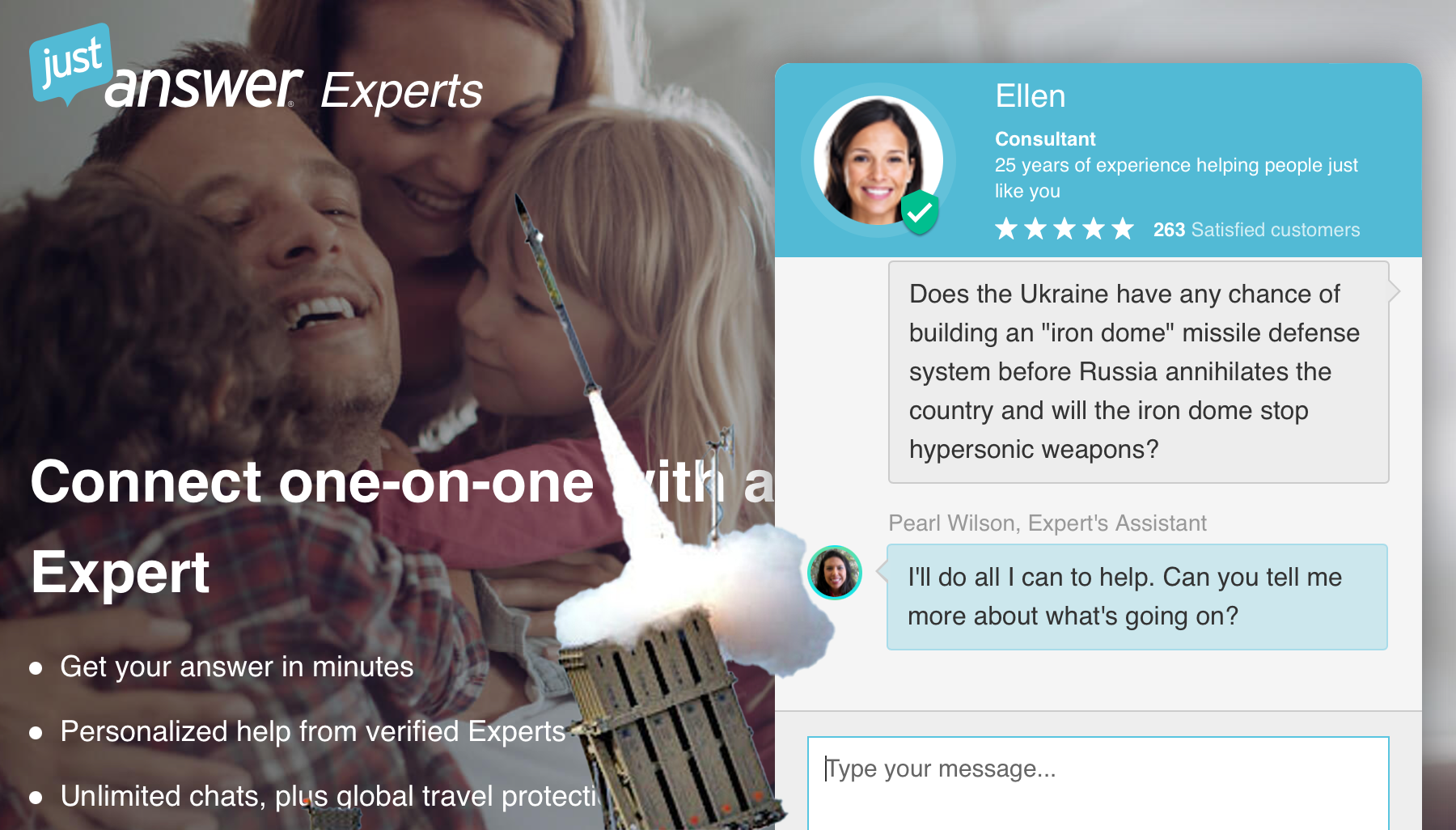 JustAnswer, a San Francisco-based tech platform, is working with Ukraine to try to help the country build its own ‘Iron Dome’ air defense system.

Ukraine’s current “technology is old and slow,” JustAnswer CEO Andy Kurtzig told Fox News. “When a missile is on its way, having a slow computer is not very helpful.”

“If we could close down the skies over Ukraine, Ukrainians will have a much better chance of winning this war and of democracy winning out,” Kurtzig suggested.

I reached out to JustAnswer but their "experts" did not appear to know what was going on.

“We’re helping them upgrade their computer systems and their networking systems and software,” the tech entrepreneur explained, expressing confidence that Ukraine “can be much faster and much more accurate about attempting to swat down these incoming missiles from Russia” after its systems are upgraded.

The plan is said to include revamping a Ukrainian command center and 45 mobile monitoring stations to “dramatically improve” air defenses, which presently down only about one fifth of Russian missiles, according to MarketWatch.

Ukrainian Ambassador to Israel Yevgen Korniychuk pleaded with Israel to sell Kiev its Iron Dome air defense system earlier this month, saying that Ukraine wasn’t looking for a “donation,” and was ready “to buy it,” presumably using some of the billions in US and NATO cash currently being funnelled into the country.

“We need Israeli assistance… I mean that we need the military-technical support; we need Iron Dome… which will allow us to save our women and children from the shelling of the Russian missiles in our territory,” Korniychuk said.

Ynet news reported in February that Israel had halted an attempt by the US to transfer several Iron Dome batteries to Ukraine in the spring of 2021 amid fears of Russia’s reaction.

The US and its allies have delivered Strela, Stinger, Starstreak, Mistral and Piorun shoulder-fired surface-to-air missiles to Ukraine, with Germany committing but not yet delivering 50 refurbished Flakpanzer Gepard anti-aircraft tanks. Slovakia donated one of its Soviet-era S-300 air and missile defense systems to Ukraine in April, but it was reportedly destroyed soon after arrival (Bratislava has contested these reports).